The thrill of selling a piece of furniture made with his own hands launched a youthful Jonathan Sowter on an adventure that has mushroomed into a major enterprise. But it was even earlier, while he was still at school, that he first realised what he really wanted to do for the rest of his life.

“I was just 12 years old at school when I made my first piece of furniture, and it was better than everybody else’s in the class,” Jonathan recalls. “I realised it was something I was good at and really, from then, I’ve known that’s all I wanted to do. So I left school and got a job in a furniture company and I realised I wanted to be a furniture designer, so I went off to university and did furniture design and craftsmanship. That’s really all I’ve ever done.”

It offered a journey from England to India to open a furniture factory for his employer, and from there, he ventured to Vietnam to do the same. It was in Vietnam that Jonathan found his niche, with an opportunity to strike out on his own as a craftsman and entrepreneur.

Jonathan’s decision to establish his business in Vietnam was based on the country’s many highly skilled craftsmen – the more skills applied to a piece of furniture, the greater the competitive advantage Jonathan’s furniture had in its appeal to customers. Success came quickly.

In just two and a half years, the business grew from 10 to 1,400 employees. The biggest challenge, Jonathan says, was doing it alone. “I had no formal business training, so we just learned from our mistakes as we went, and by talking to people,” he remembers.

Manufacturing for Jonathan Charles is just one facet of the business, which exports to 53 countries. Curiously, it also manufactures furniture for very high-end competitors, providing a second revenue stream, while a third stream supplies furniture for the Ritz-Carlton, Four Seasons and other high-end international hotel projects.

“We’ve also seen ecommerce sales take an absolute rocket in growth, so the ecommerce side of furniture has taken off in the past few months,” Jonathan says.

European and American furniture manufacturers have outsourced to Asian firms, but many haven’t enjoyed the same success due to their lack of local knowledge and influence with suppliers. That played to Jonathan’s advantage, because they “simplified and dumbed down their expectations”.

“Throughout everything we’ve been cautious. We’ve had strategies in place to downsize if we need to, and to stretch out our orders,” Jonathan says. “But luckily, we haven’t had to implement any defensive strategy throughout the pandemic, and I think it’s because we’ve got different eggs in different baskets – the retail side, the interior design side and the hospitality hotel project side of the business. “Everybody’s temperature is checked every day, with social distancing in canteens, limiting distance and changing the layout in the office, and things like that. We have medical staff in the factory monitoring everybody. “But most importantly, educating our employees to just go to work and go straight home. Our people took it seriously from day one. The Vietnamese culture is very family-oriented, so they don’t want to catch it and take it home. We haven’t had a single day of the factory being closed through the whole situation.”

“At the same time, we worked on doing the exact opposite, which is how we stood out,” Jonathan says. “It’s very different in Asia. It’s about relationships. Everybody knows I really love Vietnam and respect the Vietnamese people. They’re very hardworking – that’s why I have a business here.”

Being so reliant on the quality of materials for its products, Vietnam Furniture Resources has forged close ties with its materials suppliers, whom Jonathan prefers to call strategic partners. 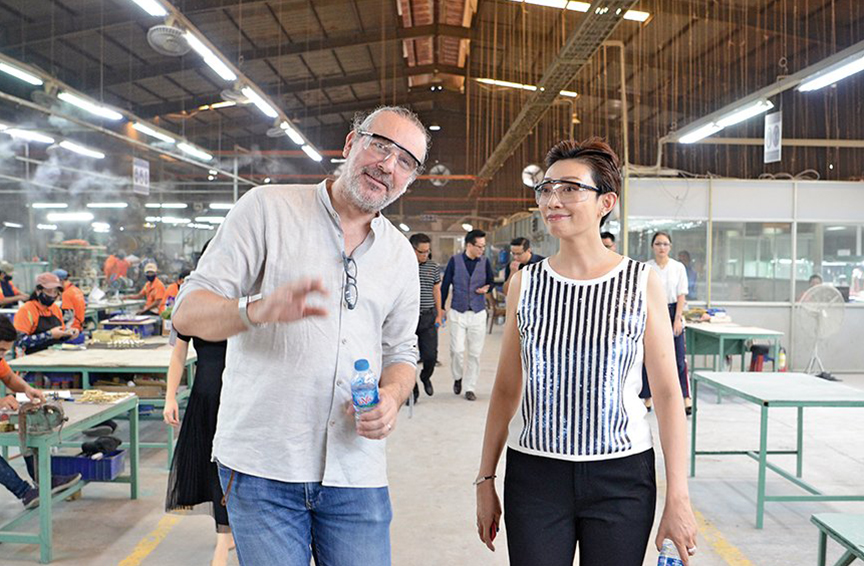 The company is still working with many of the same partners that it dealt with 15 years ago. The supplier who provided the first five litres of chemical when he had 10 workers still supplies the business today.

“We see them very much as a strategic partner – if we have a problem with chemicals, they’re here to solve it,” Jonathan says. “The key, and our biggest challenge, is forecasting the materials we require, so we share our forecasting with our suppliers so they can make sure they’ve got their supply chain in line as well.”

Jonathan relies on a self-taught philosophy for his relationship with employees. “Just make sure everybody can fulfil their ambitions within your company, and they’ll be loyal to you,” he says.

“I make a point of trying to find out what each person’s ambition is, and make sure they can achieve that ambition within our company.” That came from his previous employment experiences with bosses who were “not very nice”.

“They weren’t good leaders. I probably learned the most over the years from how my bosses did things wrong, and I realised I didn’t want to be like that guy. I think you learn more from the bad ones.

“Making furniture isn’t the challenge; managing people is the challenge. As you get bigger, the pressure’s on to make tough business decisions, and at the same time maintain that culture that you love in the company. That’s something we work very hard on, and it’s probably the most important aspect of running the company.”

After a few moments’ consideration, Jonathan considers his greatest strength is his ability to do anybody’s job on the factory floor. He knows how to operate every machine, which garners a lot of respect from his employees.

“I’m a craftsman first and a business owner second, and I think that is the key to our success,” he says. His penchant for getting his hands dirty, being involved in every part of the business, mixing and eating with employees in the company canteen all give Jonathan a clear impression of where the business is doing well – and not so well.

That hands-on involvement gives him a licence to be decisive, a trademark of his management style. “Just do it. Just make it happen. If you think too much about it, you’ll never do it,” he insists.

“Work harder than everybody else around you – lead by example.” As a resident of Vietnam for more than 25 years, it’s home for Jonathan and his family. And retirement? Not so fast, he says.

“I was joking with my wife a few weeks ago that one day in the future, if I ever retire, I will build a shed in the garden and make furniture in the shed,” he says. “I’m doing what I would do in retirement anyway, so I’m just doing what I enjoy.”