For the past 25 years The International Society of Furniture Designers’ (ISFD) annual Pinnacle Awards have honored the top professional furniture designers and their creations. But being a finalist or winning a Pinnacle Award means so much more. It has launched design careers and increased company awareness as it spurs interest in good design beyond the furniture industry.

“We have always known that winning a Pinnacle Award was powerful recognition,” stated John Conrad, ISFD executive director. “But it was not until we looked at the numbers and started asking past winners what it did for them that we realized how influential the Pinnacle Awards can be and the difference they can make in a designer’s career and a company’s reputation.”

ISFD hosted the 2020 Pinnacle Awards as a virtual TV-style program, “Good Designs Unmasked,” on the organization’s YouTube channel. This was the first time that the Pinnacle Awards were open to the public showcasing the best of design directly to consumers. Conrad said that he was “Excited to see that this year’s Pinnacle Awards have topped 15,300 YouTube visual impressions and are continuing to grow. The views on social media are over 10,000 and the award winners have been covered in over 104 national news outlets equaling more than 102M potential readers/viewers. The ISFD website traffic has also increased 170%.”

Jason Phillips, vice president at Phillips Collection said that being a Pinnacle Award finalist and a winner “Goes far beyond the fleeting excitement of the ceremony and subsequent press. What is much more significant is the confidence that industry recognition inspires. It gave me validation that I was on a good track. It opened my eyes to the world of professional design. The networking that takes place during the ceremony has proven to be a powerful benefit as well. Now that Phillips Collection has won several Pinnacle Awards it has put us on the map as a design leader.”

D. Scott Coley, owner of D. Scott Coley Designs, agreed with Phillips in that winning a Pinnacle Award was “A boost in self-confidence. My first Pinnacle Award was for Charleston Forge in 1997. The experience, along with a few new clients, helped me establish my freelance design career.  I believe it gave Charleston Forge the confidence to provide us with more work and encouraged us both to enter more designs which subsequently have won additional Pinnacle Awards.”

“I attended my first Pinnacle Award banquet as a representative of Baker Furniture,” recalls Shaun Melvin, currently the vice president of design and development for Jonathan Charles,  “I had just joined the company as the design director and authored my first work, The Lexicon Collection. The nominations and subsequent wins along with the press helped Baker shed its reputation as a ‘reproduction house’ company. This year I attended as a representative of another rebranded company, Jonathan Charles. We were nominated eight times across seven categories and won two awards for the first time. I have no doubt that the Pinnacle Awards were an important influence on our business. Within weeks of the ceremony, we had new floor placements with key retailers who had overlooked us in the past.” 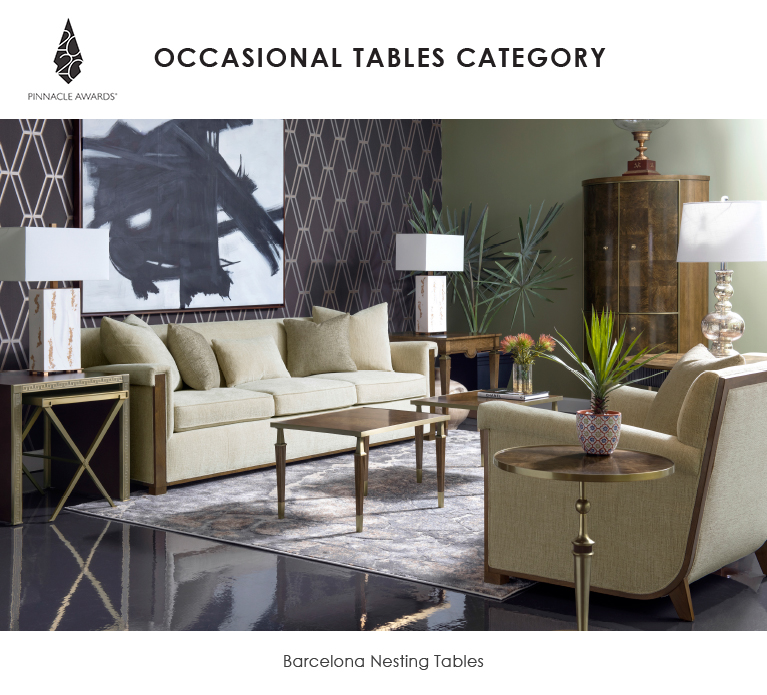 As owner/designer of Redhead Furniture Design, a freelance residential case goods design firm, Abby Lane shared that “Winning a Pinnacle Award helped promote my work among my customers, both current and potential. Following my win in 2019 many of my customers reached out with congratulations and my winning client was excited to be recognized for a top design. In addition, I believe the positive press helped me land a new customer by putting my name fresh in their minds when they were thinking about hiring a new designer. They called me out of the blue a week after my win to say that they wanted to work with me.”

Stephanie Lena, principal designer for LENA design added “Winning Pinnacle Awards as a member of a design team has given our team camaraderie. The thrill of the win is always special and has since given me the confidence to push companies a little further in design to make them the best that they can be.”

Phillips concluded “Winning an award has been nice but it’s what surrounds those victories that has been most meaningful to me. It validates my efforts and helps me stay focused on the rest.”

Watch for the opening of the 2021 Pinnacle Awards coming in March.